How Oral-B learned iterative design and won on the CES show floor. Here’s the story behind the evolution of the toothbrush. 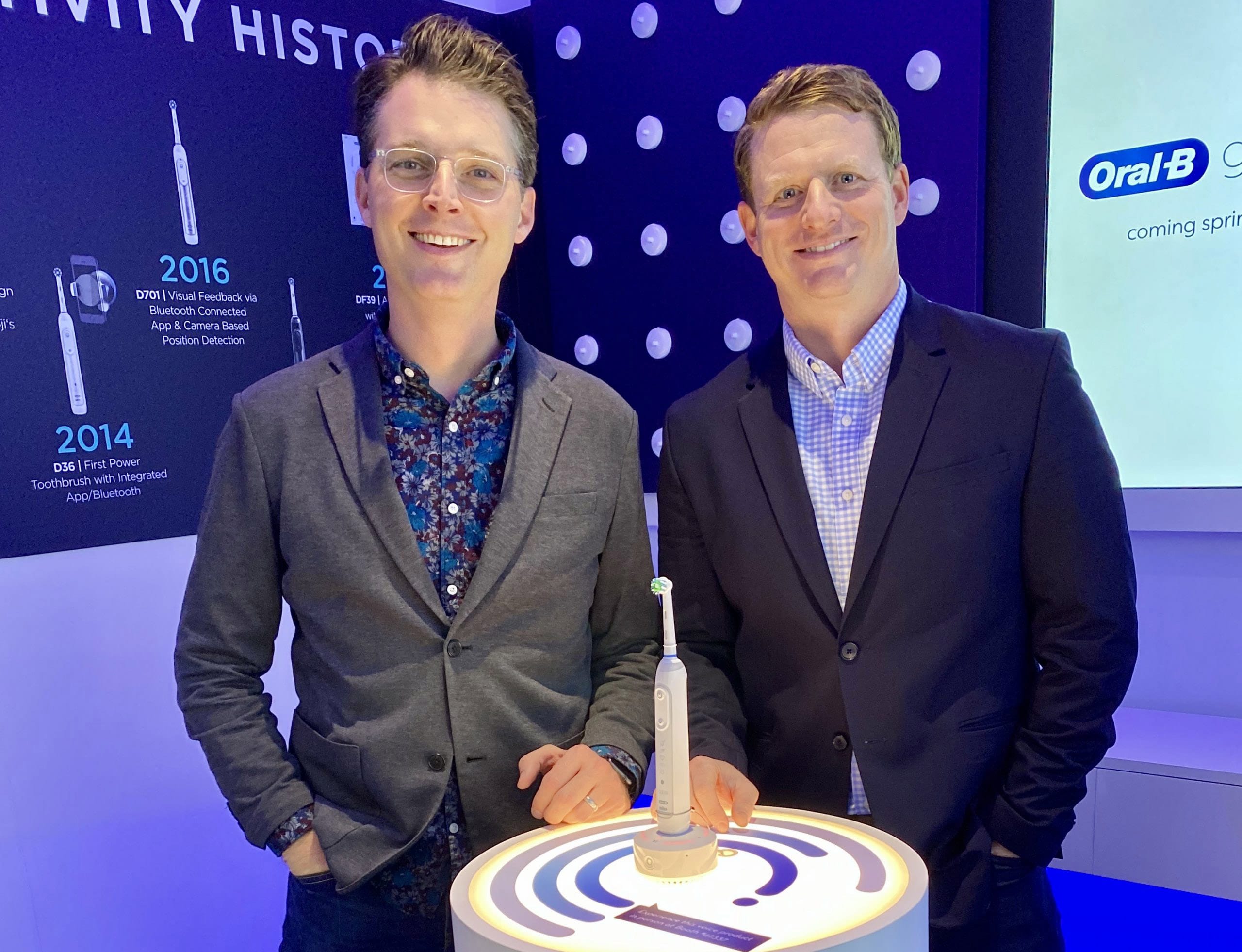 How does a new product make it to the CES show floor? One way to explore innovation is to examine the creative process that leads to a successful product launch. P&G’s Patrick Schwing, Oral-B Associate Brand Director, and PJ Mason, Associate Director, Design, Oral Care, shared the story behind their product.

The path from the creative team’s brainstorming white board  to the exhibit floor at the Consumer Electronics Show is far from obvious. Last year, P&G highlighted several products at the Consumer Electronics Show (CES), including the Oral-B Genius X toothbrush. In a first for the brand, the Oral-B team demonstrated  advances in its then-brand-new toothbrush, including personalized feedback that leads to better brushing and the use of artificial intelligence to recognize how users brush. You’ll see the Oral-B team at CES again in 2020, showing new technology that could further shake up the once-staid world of dental hygiene.

But groundbreaking technology doesn’t come out of nowhere. “A major product innovation is iterative,” says Schwing. “It’s a ‘hypothesize; generate; learn’ loop.” The goal is to move as quickly on that cycle as you can, he says, and to do so as often as possible. “Each loop gets clearer with every iteration,” he explains.

The Oral-B team certainly has had plenty of opportunity to apply that innovation loop. “We put an LED light into a toothbrush in 1990,” says Mason. “The light would flash at the end of two minutes.” Every product iteration since then has added more capabilities.

Start with the consumer’s need

It’s easy for technologists to think in terms of whiz-bang features. But the Oral-B team does its best to stay inspired by deep consumer needs. “We have to pump the brakes and ask, ‘Are we benefiting the consumer?’” says Schwing. If a feature doesn’t serve its user, he adds, it doesn’t make it into the toothbrush.

That’s a lesson the team learned the hard way. For instance, the 2016-era toothbrush had position detection, which gave feedback to  the consumer when she finished a portion of the mouth – which the Oral B team calls “quadrants.” However, to make the system work, it needed to access a smartphone and a special adapter. It took a minute or two to set up – every time – which was far too taxing for a two-minute daily habit. Not to mention that the consumer needed her phone handy, and would have to to install yet another mobile app.

The Oral-B team contemplated: How do we break the paradigm wherein higher functionality leads to more friction – and therefore less usage?

The team began with perceived benefits. For example, consumers saw value in the quadrant feedback, because it told them they were applying appropriate pressure in the right parts of the mouth. They also appreciate the convenience of Apple HealthKit integration, which collects long-term trends that can be shared with health professionals.

The design process has all sorts of inputs, says Mason, from listening to the R&D department to consumer research. That includes reading through consumer comments on the company’s hotline, Amazon product reviews, and blogs. What do people complain about? What do they like?

Then, says Schwing, you can develop a hypothesis about how to solve the consumers’ problem, and build prototypes that test those theories.

The Oral-B team is committed to the Growthworks model, based on RAPID iteration, which is the platform that P&G is using  to apply Lean Innovation practices to future growth opportunities. It’s based on an iteration of hypothesize, generate, learn.

One lesson the Oral-B team learned is that people don’t want to be judged every day. As a result, any solution offered needed to focus on improvement rather than a pass/fail experience.

“The single biggest issue in oral hygiene is compliance,” says Schwing. “Simply getting people to do it.” As a result, the design process was based on giving consumers tools that would help them actually be motivated to brush their teeth, and to make the use of the toothbrush lightweight and seamless.

That meant designing for a frictionless data flow, says Mason. The conclusion: Get rid of the app. The phone should be used only for configuration, with status updates (such as brushing data) sent by email and text.

Fall in love with the problem

Part of the “hypothesize, generate, learn” process is to test assumptions. “We hypothesize that consumers want more engagement,” says Schwing. “So, what are ways we can engage them?”

When you work on your own bright ideas, urges Mason, “Look to generate as many ideas as possible. Fill up a wall with ideas. Bring people in to get feedback.”

For Oral-B, one brainstorming idea was to incorporate a voice assistant into the new model. That’s not a logical place you might go in regard to toothbrush design, says Mason. But, he says, the voice assistant drives engagement, which drives compliance. “It was non-obvious, but turned into one of the biggest ‘delighters’,” he adds.

When you come up with something promising, Schwing says, it’s best to then get input from consumers. Show them sketches and prototypes. “Just talking about it doesn’t get you to the experience,” he says. Show, don’t tell.

To demonstrate the proposed features, the Oral-B team mimicked the voice assistant. “Do something to simulate it. Let the consumer make the connection,” Schwing says. “Describing it gets you nowhere.”

They began with sketches and drawings. Then they created a minimal viable prototype that represented what it’d be like for a consumer to use the product. This  helped people experience the idea rather than have someone explain it to them. “Their facial reaction to seeing it tells you a ton about the experience,” says Mason.

One way to know when you’ve got  a big new innovation right, says Mason, is that the product appears to be surprisingly obvious. “People say, ‘I’m surprised this never existed before.’ It’s an ‘Oh, my gosh, of course’ reaction.”

Expect to see that emotional delight once again on the CES show floor in the P&G Oral-B exhibit area this year – and then look to create the same for your own new product design!

The Industrial Age Is Over. Now, We’re in the Exponential Age

Banning TikTok Was Just the Beginning

When there’s more data to analyze, companies can improve the quality of a consumer’s life — but not at the expense of customer trust. How can organizations collect and analyze data while also genuinely protecting it? P&G’s privacy officer, Susan Shook, explains the company’s thinking.


Read More
In the News

From “Task to Be Done” to “Delightful Experience”

Nobody expects to create a relationship with a household device — yet that’s exactly what P&G is creating. Leaders share the thinking that transforms daily products into brand-enhancing consumer experiences.


Read More
In the News

The annual Consumer Electronics Show is an ideal place for P&G to share its innovation story of connecting breakthrough technology with consumer experience. Last year’s P&G presences received many accolades and awards for both the P&G LifeLab experience, as well as executive participation in marquee CES sessions. This year P&G will again have a major […]