Work from home expert Nicholas Bloom, a Stanford economist, says office space will get more collaborative, and you’ll still be working from home (just not as much).

Of all the things that will be forever changed by the pandemic, the workplace ranks near the top. Whether social distancing and health fears linger, the year-plus long grand experiment of working from home has given companies and employees a new way of thinking about how and where they work together.

“Working from home will stick,” insists Stanford University economist Nicholas Bloom. Since May, Bloom has been surveying 2500 American workers every month about how they’re feeling in their new work environments. More than one-quarter of them want to keep working from home full-time. “But most people post-pandemic are not going to be at home five days a week,” says Bloom. “They’re mostly going to be going into the office three days a week.” 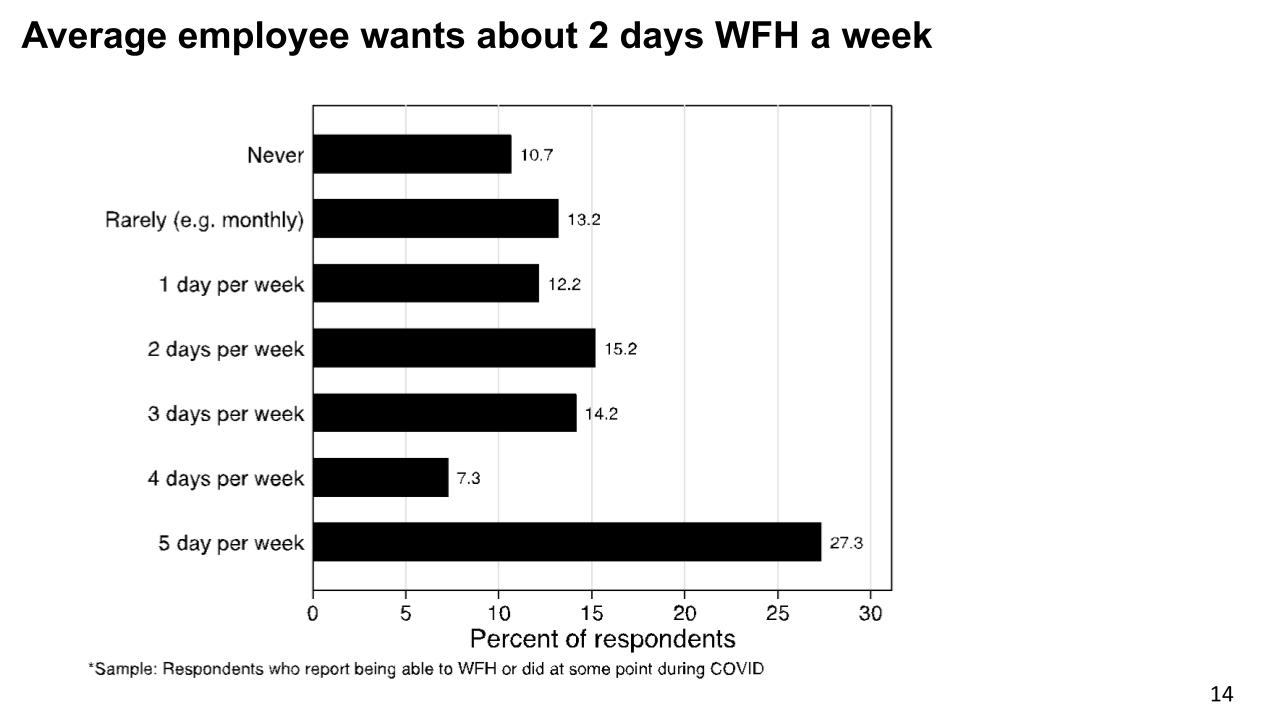 Bloom has been watching the work from home space for years. In 2014, he conducted a study of Ctrip, a travel agency site in China, where 13% of employees volunteered to work from home over a nine-month period. Bloom and his fellow researchers monitored productivity as well as satisfaction. Productivity went up 13%, job satisfaction doubled and attrition dropped by half. The experience was so positive for both the company and the employees, work from home became a company policy and many more employees opted for it. 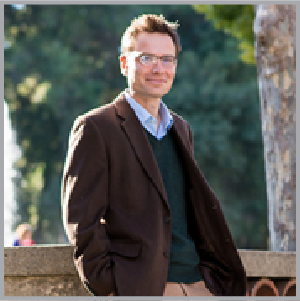 Now, or soon, companies elsewhere are about to undergo their own work policy changes. Bloom, and others, assert that a “hybrid” approach will be adopted across all workplaces where employees are able to do their jobs from home: Employees, grouped by teams, will go into the office two or three days per week, largely for meetings and collaboration, and work from home on the other days. “The key thing is having people with their whole team and it has to be the same days and it has to be organized in advance,” says Bloom. “Then once you get that, you realize that you can use your office space much more efficiently.”

Bloom continues to gather data each month from WFH employees each month and estimates that 40% of workers fall into this category now, with half expected to remain fully remote when offices open back up. We put four questions to him about what our post-pandemic work world will look like:

You’re the WFH guy, but is every company going to embrace this way of working?

There are firms on both ends. There are firms that claim they are virtual first. I’ve spoken to maybe 100 companies by now and there are some, like Coors and [Dropbox], that claim they are going to be entirely virtual. Until they’ve sold their office buildings, I’m skeptical that’ll ever come to pass, but let’s see. And then there are firms on the other end that claim that everyone might have to come into the office and no one’s going virtual. There’s a commercial property company, not surprisingly, saying they already have 75% back on premises because they want everyone to come in. I spoke to another software company, not in the Bay Area, about whether they were going to be virtual. And they said no. 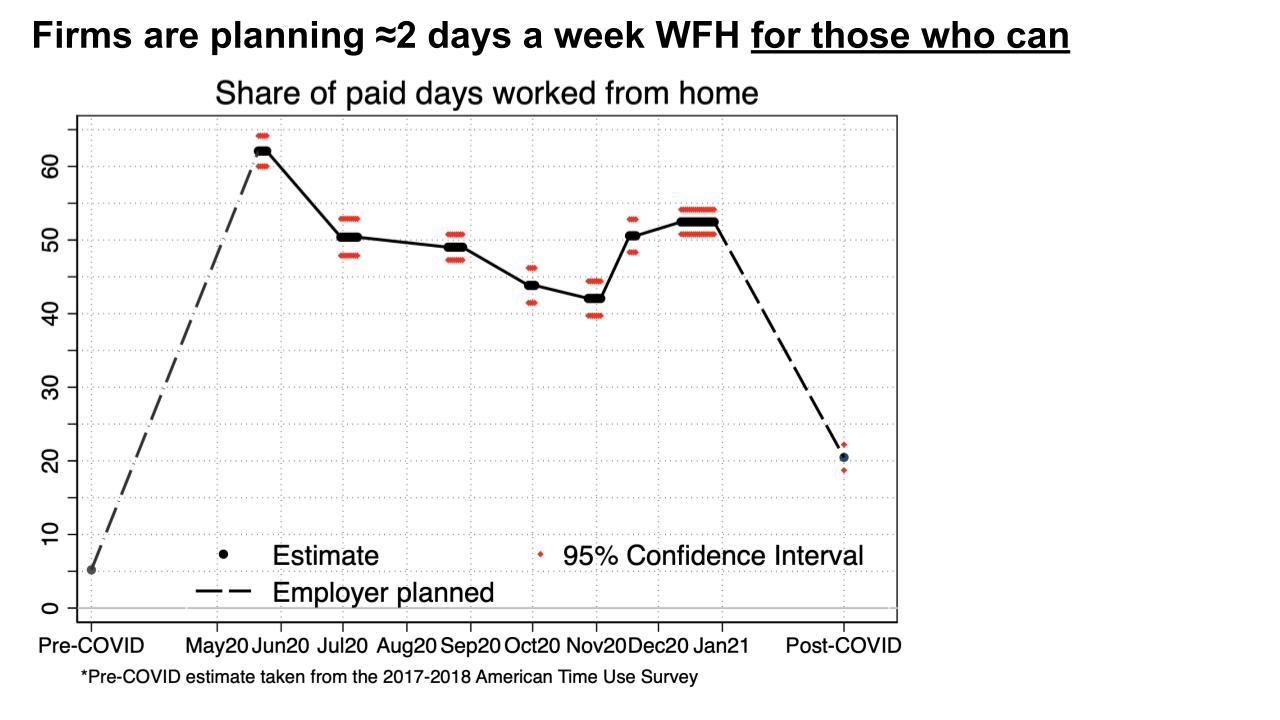 What will happen to office spaces in WFH or partially-WFH structures?

You can use your office space much more efficiently. One of the issues is that people are very nervous about social distancing. Survey after survey, people are very nervous about being too close, post-COVID. We asked about returning to work if a COVID vaccine is made widely available. Only 28% said they’d return completely. So it’s a world in which you have twice as much space per person. And it’s not just your desk. It’s things like the entry. When you talk to architects, the choke points are the reception, the toilets, the elevators, the canteen.

The other issue is, if you take the long-run plan as true, then post-pandemic, when you’re in the office three days a week, you want to be working with other people. It’s when you do all your meetings and presentations and trainings and client events. So you don’t want rows of little cubicle offices, you actually want the office to be primarily open, with communal space meeting rooms and some little offices for some quiet time. The old-school 1960s offices, the cubicle after cubicle — that kind of activity is done at home. So it’s almost the reverse of what it is right now. It’s illogical to come in just to use a cubicle. 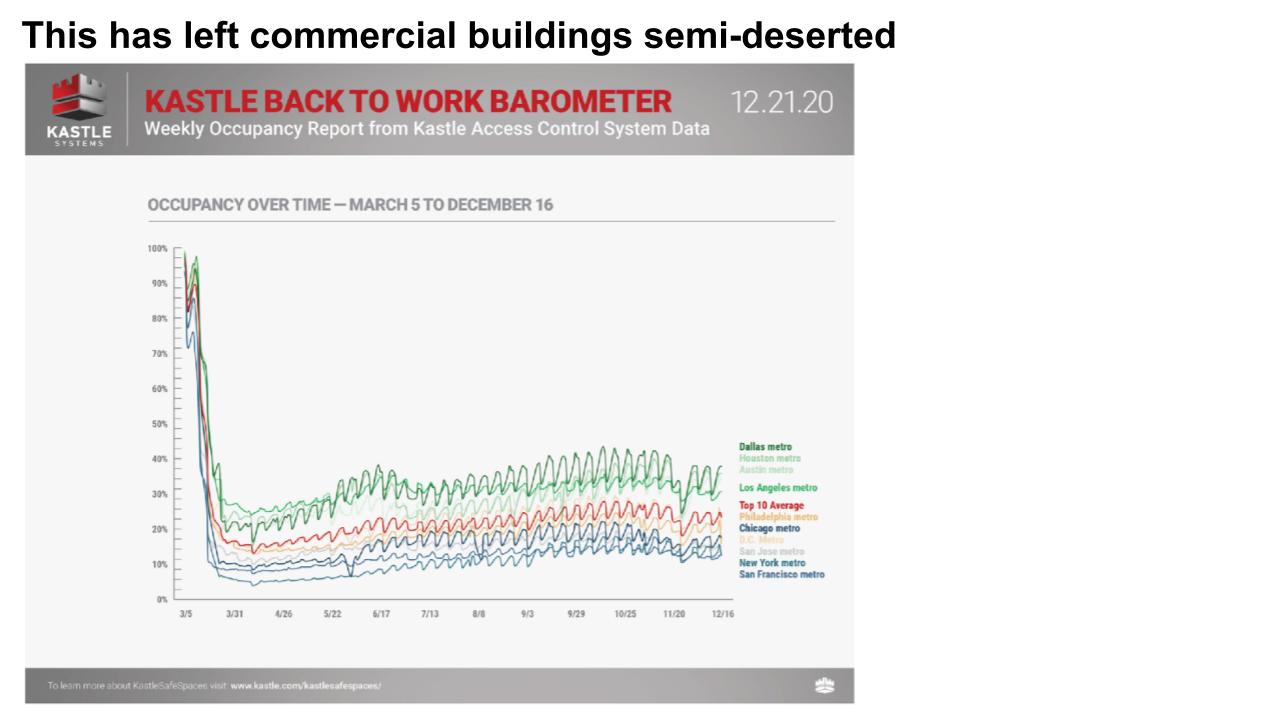 How do global companies approach WFH? Different countries have different orientations to WFH. How will that play out for companies with operations across the world?

The UK is very similar to the US. If you talk about Hong Kong, most people live in tiny, horrible apartments, and they can’t work from home. So America is fortunate. There is a lot of land. Americans live in the largest dwelling on average in the world. Northern Europeans and Americans tend to live in large houses with broadband. I talked to a firm that had a lot of employees in Indonesia, and most of them don’t even have broadband or laptops at home so they just can’t do it. As you go into areas with smaller housing and denser places, it’s more problematic. The other issue that’s interesting is that a number of companies have said, you know, we figured out if people can work from home five days a week, why do we need them working in our company? Why can’t they just be outsourced?

Or, why do they need to be outsourced in the US? You suddenly realize that if somebody is remote five days a week, you never physically need to meet them. In which case, it’s less clear why they need to be your employee and all the costs that go with it, and all the inflexibility. I think there’s going to be a big boom in outsourcing. Some of it will be to Mexico, say, where it’s in the same time zone as the US, which matters, but some of it will be to India. I think in the same way that China was a huge driver of manufacturing imports into the US, the pandemic long-run is going to be seen as the big driver of service sector imports into the US.

Aren’t there equality impacts from WFH? Not everyone can manage it — the pandemic has revealed a lot of the issues: child care, broadband, equipment, to name a few.

Of the multiple challenges for managers, one is inequality. If you look at what people want, you notice that people of all income levels tell us they want two days on average of work from home. The typical person even earning $25,000 a year tells us they want roughly 40% of days at home, that’s two days a week. But what they’ve been told they’re going to get, they’re not going to get anywhere near that. So there’s a massive gap for low earners, and there’s no gap for high earners. The short, stylized fact is that everybody wants to work two days a week, but not everyone’s going to get that. So it’s up to managers quite how they deal with it. But you’re giving a valuable perk up to the high earners who are also the people who have had, frankly, a better pandemic. So that’s one issue. 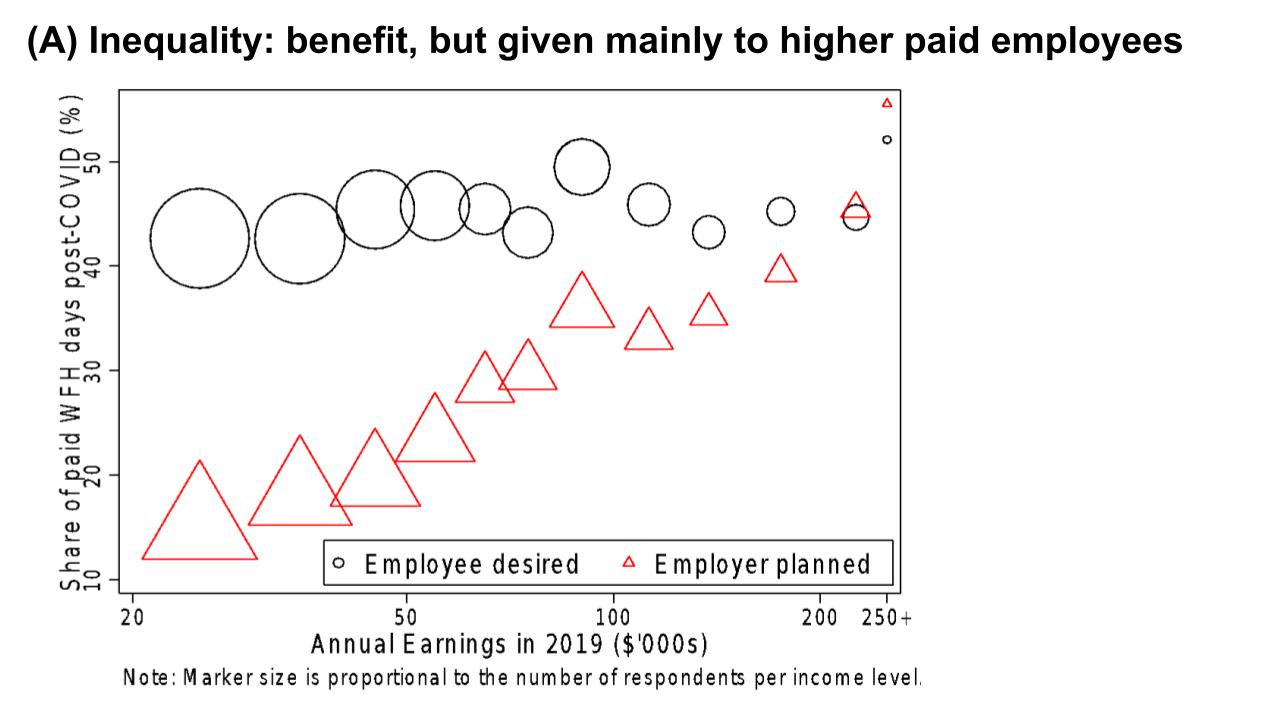 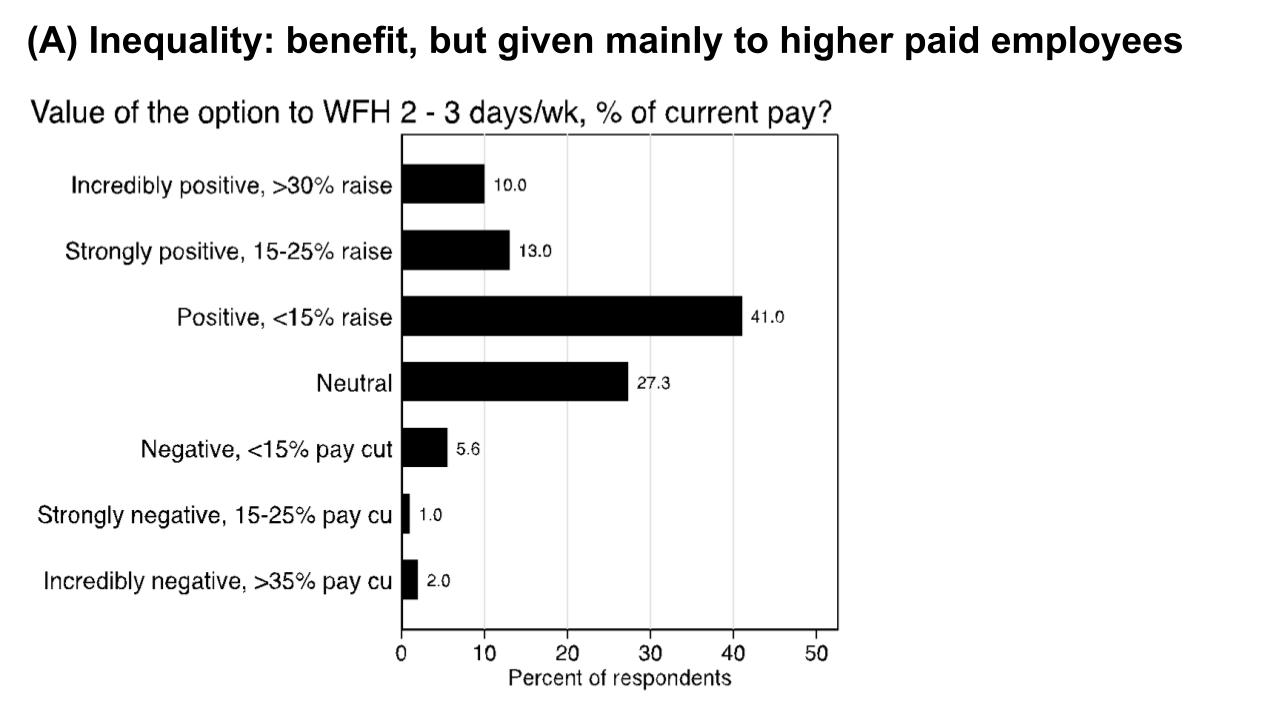 Discrimination is a different issue. In the Ctrip study, we looked at promotion rates over two years. We compared the work from home group to the control group to see the causal effect of working from home. The promotion rate is almost half, which is massive. That’s an enormous difference. Halving promotion rates is not a small thing, it’s hugely statistically significant. And it becomes kind of obvious why: It’s a combination of being forgotten about, you could call it discrimination. Senior managers say they’re not developing manager skills. They’re not in the office, they are at home. They’re taking their lunch breaks watching TV with their kids, whereas the people in the office are taking their lunch breaks with their colleagues.

Either way, that raises the issue around this choice thing. If you let people choose when to work in the office, what you are going to find is some people are going to go to the office five days a week and some are going to never turn up. Now, initially, it might seem like we should let people choose what they want to do. But it won’t be random and these people may, say, be more religious people or women with young kids, or old men, I don’t know, but the demographic split will not be even. So imagine it’s women with young kids and religious minorities, you’re going to find five years from now they’re not being promoted. And it’s not just that you have a diversity issue, you’re facing serious threat of massive lawsuits. And you lose. So when I talk to managers, it’s another reason why I say you should have a one size fits all, because it’s pretty clear where it’s going to head otherwise.

The pandemic has made everyone weary. Arianna Huffington and P&G’s Deborah Majoras are out to create healthier workplaces that prevent burnout and stress.

Leading Companies Back to Work

It’s clear the “next normal” of work won’t look the same, but what do companies have in mind? We asked — here’s what they said.

Despite challenges, 9 Elements found ways to use video streaming and remote collaboration to create a high-quality campaign.